Phew, it’s not just me. When I come across some errant behaviour on one of my devices, the immediate assumption I make is that I’ve done something to cause it. This is largely because I firmly believe that computers do only 1 thing – exactly what you tell them to do.

So when my Samsung keyboard entry went all fucked up recently, I wracked my memory searching for whatever recent tweak I’d applied that could have caused these strange & PIA errors. Typing an email became a real problem. 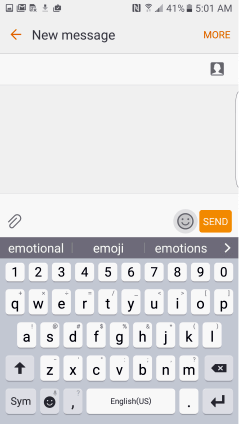 Whenever I typed contractions like I’m it replaces the ‘ with ” and deletes any letters after automatically, so instead of I’m I got I”. WTF?

Words like, say, tennis changed into ttennis and Ferrari to FFerrari, even though I’d select the correct version in the spelling bar.

Web adresses were a nightmare mess, refusing single backslashes, double only, with the second backslash replacing the first letter following – so http://1024kb.co.nz/FAQ became http://1024kb.co.nz//AQ. Oddly enough, I often type web addresses in my communications, so this really pissed me off.

Autoreplace, autocaps, autospace and autopunctuate were all turned off, I was searching for some malicious virus-like program that had sneaked in, but nothing was found. Then I received a Support call, “Halp” they said, “my S7 keyboard is playing tricks on me” – phew, I didn’t fuck this up, Samsung did.

Time for a new approach. I reset the keyboard, reinstalled the keyboard, changed options, everything I could think of – all to no avail.

So I downloaded the AOSP standard Google keyboard – Samsung’s version is superior when working properly – installed that then removed the Samsung original using Root Uninstaller. Yes! Problem cured, if not actually solved.

I haven’t found what caused this problem yet, & I don’t think Samsung has either. But the user solution is simple – replace the keyboard app.

If you’re using a Galaxy S6 or S7, you too are probably experiencing this same phenomenon. Go to the Play Store, search Google Keyboard, install it. Next, go Settings / Language & Input, select the Google Keyboard as default. You’re probably good to go at this point, however if your device is rooted I suggest you download Root Uninstaller & remove the faulty Samsung stock keyboard app.

It’s a hack fix, this one. Ripping out the Samsung keyboard & swapping it out isn’t fixing the real problem. When I discover how to reinstall the correctly functioning Samsung keyboard, I’ll post the method here.